Too much Coffee Linked to Premature Deaths in Younger People

Drinking more than four cups of coffee per day does more than increase the risk of the jitters, a new study from America suggests. Researchers report that heavy coffee consumption, defined as more than 28 cups of coffee per week, is associated with an increased risk of all-cause mortality among men.
For men and women 55 years of age and younger, the association between heavy coffee consumption and all-cause mortality is more pronounced.
In this latest study, which is published online August 15, 2013 in the Mayo Clinic Proceedings, lead investigator Dr Junxiu Liu (University of South Carolina, Columbia) and colleagues assessed the data from the Aerobics Center Longitudinal Study. The retrospective analysis included 43 727 participants followed for a median of 17 years, during which time 2512 deaths occurred. 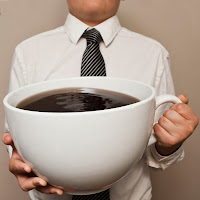 Despite the limitations of the study, Lavie told heartwire , "it certainly looks like people who report intakes of low amounts of coffee are not getting significant harm, and that's up to about 28 cups a week, which is a decent amount of coffee." He pointed out that a cup of coffee as measured is an 8-oz cup, and not the supersized 20-ounce cups typical of Starbucks and other coffee chains.
In a multivariate analysis, men who drank more than 28 cups of coffee had a statistically significant 21% increased risk of all-cause mortality. In women, the risk was not statistically significant. In men younger than 55 years of age, drinking more than 28 cups per week was associated with a 56% increased risk of death compared with non-drinkers. In younger women, such heavy consumption increased the risk of death 113% compared with those who did not drink coffee.
For people who like coffee, including himself, Lavie said the study suggests coffee is relatively safe if people limit themselves to less than four cups of coffee per day. For those who consume more, Lavie said the research is not intended to scare anyone, but it can't hurt for people to think about the association.
"Honestly, for myself, I could easily go some days having a sixth cup of coffee, but this is leading me now to try to limit myself to the third, and maybe occasionally have the fourth," said Lavie. "Most days now I'm sticking with two or three cups. And honestly, for most people, it's a habit. There's something to the first or second cup, but if you're drinking it all day long it's really just a habit. And if you have a signal for increased mortality, and you know about that, it might make people think or stop after the third cup."

Posted by The Chandos Clinic at 11:06