True to its name, watermelon (Citrullus lanatus) is made up of greater than 90% water. Watermelon is low in calories (a 2-cup serving contains about 90 calories) and is regarded as a healthy food. Watermelon contains a high concentration of lycopene, a carotenoid that may have beneficial effects on cancer and cardiovascular disease risk.Watermelon is also high in vitamins A and C.

In addition, watermelon is a rare food source of citrulline, an amino acid that was first isolated in 1930 from watermelon. Citrulline is an antioxidant and is thought to allow watermelon to survive drought-related oxidative stress.

Citrulline is a precursor for arginine, which is involved in the formation of nitric oxide and creatine, and is a key constituent of the urea cycle, which detoxifies ammonia. The key interest of watermelon as an aid to exercise is based around this detoxifying effect which would improve muscle fatigue and recovery. 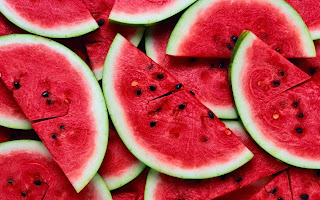 A group of researchers found that citrulline supplementation decreased time to exhaustion on a treadmill test. Interest in citrulline supplementation to enhance physical performance was sufficient to induce the Air Force to conduct a randomized, double-blind, cross-over study of citrulline malate (6 g/day). The researchers found no differences between citrulline and placebo in measures of respiration, lactate production, or time to exhaustion during incremental cycle ergometry.

As the current research done has provided mixed results, more research is required to clarify the effect of watermelon or citrulline on exercise in general and muscle soreness in particular. Until such research is available, watermelon can be recommended as a healthy, low-calorie food for everyone except those with rare inborn disorders involving citrulline or arginine metabolism. If you are interested in trying watermelon to lessen muscle soreness after exercise, try exercising with and without eating watermelon and comparing the results.

Source: Medscape
Posted by The Chandos Clinic at 09:39