A survey involving adults receiving reiki through volunteer services at a cancer infusion centre indicates the therapy has ‘a broad range of symptomatic benefits, including improvements in common cancer-related symptoms.’ 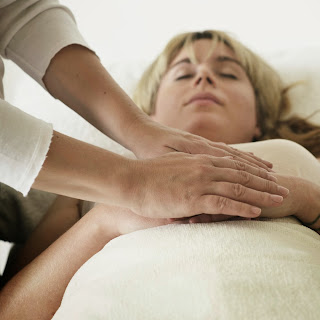 A total of 145 surveys were completed over a six-month periods, with 47 participants seen in the cancer infusion centre and 98 in other areas of the hospital. Adults taking part were asked to rate on a five-point scale perceived changes in pain, mood, sleep and appetite after receiving reiki.

The results showed 94 per cent of patients who accessed reiki at the cancer centre and 93 per cent who accessed reiki in other areas of the hospital, rated it as a positive experience, with symptomatic improvements similar for people accessing treatment in either context. Most notable were perceived improvements in relaxation, anxiety/worry and mood.
Responses were unaffected by previous exposure to reiki, massage or other touch therapies.

Posted by The Chandos Clinic at 11:11